The Wagner Institute’s 19th-century exhibit hall houses an extraordinary collection of natural history specimens including mounted birds and mammals, fossils, rocks and minerals, insects, shells, dinosaur bones, and the first American saber-toothed tiger, discovered on a museum-sponsored expedition to Florida in 1886. Gathered largely by founder William Wagner and Institute curators and faculty during the 19th century, the collections are displayed in cherry-wood and glass cabinets dating from the 1880s and maintain their original “systematic” scheme, providing a rare view of a Victorian science museum. Originally assembled to teach science, the specimens are arranged for study. The exhibit is one of the largest systematically arranged collections on display in the country and remains in active use as a key educational tool of the Institute’s free science programs. It also serves as a resource for scholarly research.

The Wagner Institute has an extensive library of primarily scientific works collected by the founder and over the course of its history. Dating from the late 17th to the early 20th century, the collection covers the natural and physical sciences, education, medicine, archaeology and anthropology, the pseudo-sciences, instrument building, and engineering. The Library contains monographs, serials, archives, manuscripts, maps, prints, photographs, drawings, and glass lantern slides. The collection reflects the Institute’s curriculum as well as the research interests of its faculty, fellows, and museum staff. The Library is especially rich in early 19th century English and American works devoted to the history and teaching of science and technology. The extensive journal collection includes research done by most major European and Asian scientific societies and many publications from smaller (and for the most part defunct) scientific societies. The scientific revolution, intellectual and social history, and the history of science can be explored through material on philosophy, religion, science, and educational reform. The archives and manuscripts collection includes the personal and business records of the founder William Wagner (1796-1885) dating from 1810 and the records of the Institute from its inception in 1855. Research papers and correspondence of many of the Institute’s distinguished faculty and staff, including Joseph Leidy, Edward Drinker Cope, and William Berryman Scott are also part of the archives, as well as drawings, teaching charts, and over 3500 glass lantern slides used to illustrate lectures. 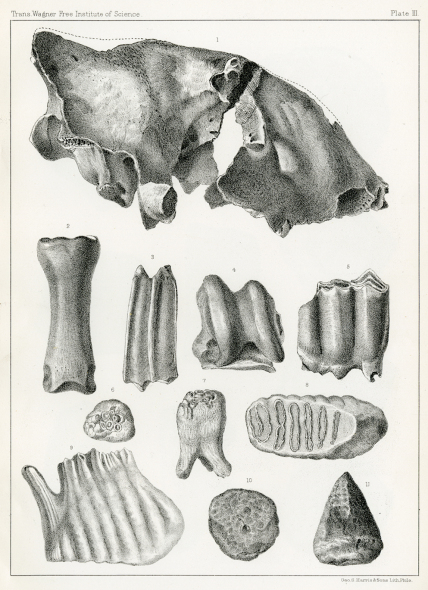