Labor and the Visualization of Knowledge in American Geological Surveys

AJ Blandford is a Ph.D. Candidate in the Department of History at Rutgers University. In 2016-2017, she was a Consortium Research Fellow.

With the generous support of the Consortium Research Fellowship I was able to track relationships between lesser known local geological reporters such as Jacob Cist, whose papers I studied at the Academy of Natural Sciences at Drexel University, and well established figures such as J.P. Lesley who worked on the Pennsylvania State Geological Surveys and whose papers I researched at the American Philosophical Society.

Cist was the first postmaster and landowner in Wilkes-Barre, Pennsylvania. He was an early contributor to the American Journal of Science and Arts and through these reports became a correspondent with Adolphe Brongniart, an important French Paleontologist. Cist’s letters, pamphlets, maps, specimens, drawings and watercolors both promoted his commercial coal-mining interests and helped establish correlations between American and European coal deposits through their fossils.
Lesley joined the first Pennsylvania Geological Survey as an assistant upon completing his classical education at the University of Pennsylvania. Lesley’s personal journey from an untrained field assistant to the chief topographer for the first survey, to his appointment as the lead geologist of the second Pennsylvania Survey reflects the growth of geological work and the professionalization of scientific work between the 1830’s and 1860’s in America.
Cist and Lesley were both talented surveyors whose geological work was made in the context of wider artistic interests—they were both avid sketchers and watercolorists. In each case I was able to follow the visual information presented in their published reports back to the letters, notebooks, and other illustrative work. While Cist was making observations independently and on a smaller scale, Lesley was operating within and at the head of “a great public undertaking.” The Consortium Research Fellowship has allowed me to follow the shifting visual, material and political contexts of geological research in Pennsylvania during the first eighty years after the founding of the nation.
Both the American Philosophical Society and the Academy of Natural Sciences were early hubs for mineralogical and geological research, much of it supported and underwritten by William Maclure, the most celebrated early American geologist. Thanks to the assistance of the Academy of Natural Sciences Collections Manager Ned Gilmore, I was able to follow the lasting material traces of this research by viewing some of the original APS and ANS mineral and fossil collections, both of which are now housed at the Academy of Natural Sciences of Drexel University. I’m extremely appreciative for the Consortium’s support which has allowed me to conduct research into the material, visual and textual traces of early nineteenth century geological reporting. 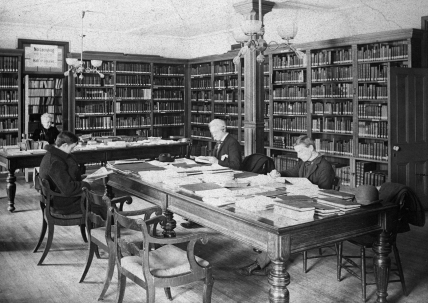