Model Bodies: The Art, Science, and Craft of Human Modeling for 3-D Computer Graphics and Animation, 1960-1995 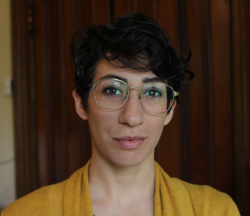 Alana Staiti is a 2018-2019 Research Fellow and Ph.D. Candidate in the Department of Science and Technology Studies, Cornell University.

I was fortunate to receive support from the Consortium to conduct research on my book project tentatively titled, Model Bodies: The Art, Science, and Craft of Human Modeling for 3-D Computer Graphics and Animation, 1960-1995. This project tells a history of computerized human modeling in North America at a time when gathering and inputting graphical information about human bodies into computers was not so straightforward or commonplace.

From the 1960s until well into the 1990s, the digitization of objects was a laborious undertaking involving custom computer systems, manual operations, and an array of not only digital and analog equipment, but also traditional artist’s and draughtsman’s tools. By the late twentieth century, digitizing equipment could rapidly capture information about live human bodies, and software could process and digitally render that information on computing workspaces. Digital bodies, avatars, and 3-D humanoids have inhabited the screens of our televisions, our computers, our smartphones, and movie theaters. They inhabit countless other less visible places – in the data sets of industrial engineers, designers, digital game developers, medical researchers, forensic scientists, and in other facilities around the world. Their human-mimetic qualities capture the attention of spectators, yet we often take their existence for granted.

This project draws on archival research, oral histories, and object studies to recount the technical and aesthetic practices of computer graphic body modeling and argues for the persistence of the body model. The computer graphic body model – the human model, the plaster or clay model, the digital model – engenders multiple ontologies that are inherently relational. Despite going through transformations in animation and rendering, visual traces of recognizability carry through the computerized form. These traces serve as testament to the importance of locating and drawing out the human body model in the computer, and they underscore the fact that materiality and bodily presence matters to computing practice.

Historical works on computer-generated imagery and computer animation have largely fallen under the purview of participant histories and media studies. They do much to identify certain actors and sites where developments in computer graphics and animation took shape, often highlighting the pioneering work of a few great men trained in computer science and electrical engineering. This project shifts focus to the people who served as body models for computer graphic modeling and animation, as I theorize the combination of scientific, technical, and artistic practices of body modeling and draw out the craft-based techniques inherent to this work. Building on literature in history of technology and body studies, I consider this approach a form of both feminist material culture studies and visual studies, as it seeks to break down Cartesian mind/body distinctions embedded in the science of optics and computer graphics by underscoring that epistemic practice is always already embodied, and that the science of image-making is informed by the sensibilities and prerogatives of the image-makers.

The mathematical principles of perspective underlie digital computer graphics and the purported objectivity of the viewer. These tenets provide the framework for building a recognizable, realistic computer graphic image. Computer graphics scientists continue to reference mathematical principles of linear perspective, as well as the visual language of Italian Renaissance architecture – a point I address in a paper for the 2019 meeting of the Society for the History of Technology in Milan. Support from the Consortium aided my study of the legacy of Italian Renaissance architecture in late twentieth and early twenty-first century computer graphics research. At the Smithsonian’s Dibner Library, I gathered images from Renaissance-era treatises on perspective and optics to aid in my conference presentation.

While much my book project focuses on human and inanimate body models for computer graphic modeling and animation, I needed to gain a better sense of the contexts in which scientific research on computer imaging unfolded more broadly, as scant historiography exists on the topic. My findings through the Consortium have allowed me to gain a better understanding of conversations about computer automation and visualization that took place in fields including image processing, computer graphics, and optical scanning from the early 1980s to mid-1990s.

At Linda Hall Library, I viewed several conference proceedings on optical scanning and recording, image processing, computer graphics, and visualization. In particular, I was struck by conference proceedings from the early 1980s from the Society of Photo-Optical Instrumentation Engineers, where a broad range of international practitioners in science, graphic arts, and business sectors reported on findings about laser scanning and image processing with varying levels of technical specificity.

I also consulted Linda Hall Library’s collection of conference proceedings from Bionics Symposia held in the early 1960s. Bionics is the science of modeling biological systems in complex technologies, including computers and prosthetics. It was eye-opening to read the proceedings, especially regarding what the participants thought was still out of reach and how they thought future avenues of research in defense, biomedicine, and computer-automated visualization could and should be developed. I also consulted bionics-related materials at the American Philosophical Society, which houses the Warren S. McCulloch’s papers. McCulloch was a formative researcher in bionics in the 1960s. His papers speak to his interest in visual prosthesis and the automatic sensing of physical environments.

At the Hagley Museum and Library, I consulted the papers of several scientists affiliated with the David Sarnoff Research Center, part of Radio Corporation of America (RCA), to get a sense of RCA’s involvement with developments in display technologies, laser scanning, and virtual reality in the 1980s and 1990s, as well as partnerships with clients including Disney and Hasbro. The toy company Hasbro commissioned RCA to develop a virtual reality console called Toaster. While the ambitious project got cancelled in 1995, research that originated at the Sarnoff Center and project partner Abrams/Gentile Entertainment represented the limits of virtual reality technology for the period.

I am deeply grateful for the Consortium’s support. Aside from helping to expand my understanding of research in computer graphics, image processing and visualization in the 1980s and 1990s, the Consortium has served as a nurturing environment in which to engage with historians of science, technology and medicine. I look forward to continued involvement with the Consortium and learning from affiliated scholars.