Sarah Bridger Columbia University My dissertation covers the political arguments among scientists about Cold War weapons, scientists’ advice to politicians and military planners, and the personal ethical concerns of scientists engaged in research with potential weapons applications. A PACHS Dissertation Research Fellowship in the fall of 2008 supported my research on this topic at three PACHS member institutions, Princeton University, the Chemical Heritage Foundation, and the American Philosophical Society. At Princeton, I followed up on previous work with the papers of the Kuhn Committee on Sponsored Research, an institutional accounting of the school’s outside contracts, particularly defense contracts, during the late 1960s and early 1970s. Headed by science historian Thomas Kuhn in the aftermath of student protests, the committee wrestled with differing interpretations of appropriate academic research activities, as well as conflicts between the university’s antiwar contingents and military-funded faculty researchers. Princeton was just one of many universities that undertook similar funding review efforts during this time period, but the Kuhn papers offer a particularly detailed portrait of the internal workings of the committee and some of the difficult questions they tried to address: Should all classified research on campus be abolished? Should engineering research with both civilian and weapons applications be eliminated as well? In what sense are researchers obligated to predict the applications of their work, and to what extent should possible applications affect the acceptance of outside contracts? In my dissertation, I compare the situation at Princeton—a school that by and large did not have explicit weapons research taking place on campus, but nevertheless housed labs contributing indirectly to military technology—to that of the Massachusetts Institute of Technology, where weapons work was explicit, and Northeastern University, where student and faculty objections to military contracts were far more muted than at Princeton or MIT. At the American Philosophical Society, I had the opportunity to read through the personal papers of Stanislaw Ulam, Salvador Luria, and Emanuel Piore. Ulam provided the key mathematical underpinnings for the hydrogen bomb and spent much of his professional career working in various capacities at Los Alamos. He also corresponded with many other scientists and politicians, on topics ranging from technical mathematical research to the viability of an anti-ballistic missile system. The Nobel-winning MIT biologist Salvador Luria, in contrast, spoke out vehemently against the militarization of science, organizing other notable Boston scientists against the war in Vietnam and U.S. interventions in Central America and testifying on similar topics before Congress. Finally, the papers of physicist Emanuel Piore contain reports on presidential science advising, research at IBM, and the recruitment of young scientists into the ranks of Department of Defense advisors. The papers of these three men illuminate some of the ways in which elite scientists have used their social prestige to influence political and military decisions. Finally, I spent a week at the Chemical Heritage Foundation reading through oral history interviews of chemists with connections to weapons research. MIT chemist Hoyt Hottel, for example, worked on napalm research during World War II and later with the Armed Forces Special Weapons Project at the Pentagon. John Baldeschwieler taught at Harvard, Stanford, and Caltech, and was sent to Vietnam with the Army Scientific Advisory Panel, where he analyzed the use of herbicides and developments in detection technology. William McMillan also served in Vietnam, as a science advisor to Gen. William Westmoreland. The recollections of McMillan and Baldeschwieler, in particular, have helped my understanding of science advising in Vietnam immensely. My research in Philadelphia this fall has proved essential to the writing of my dissertation, and I am very grateful for the generous support of the Philadelphia Area Center for History of Science. I also benefited greatly from the advice from archivists at Princeton University, the Chemical Heritage Foundation, and the American Philosophical Society, and the many helpful comments from the attendees at my Brown Bag Lecture 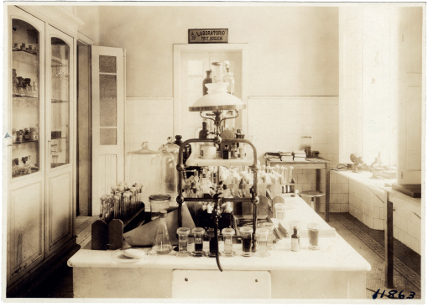