Cyberdreams of the Information Age: Machines for Learning in the Cold War United States and the Soviet Union 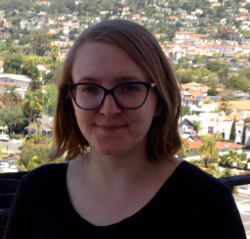 Ekaterina Babintseva is a 2018-2019 Dissertation Fellow and Ph.D. Candidate in the Department of History and Sociology of Science at the University of Pennsylvania.

As a dissertation fellow at the Consortium for the History of Science, Technology, Medicine (CHSTM), I spent the 2018-2019 academic year writing my dissertation and conducting remaining necessary archival research. My dissertation entitled Cyberdreams of the Information Age: Machines for Learning in the Cold War United States and the Soviet Union examines the connections between Cold War science policies, psychological models of the mind, and the development of the first computers designed for teaching in the US and USSR. It demonstrates that in the 1960s-70s, psychologists and computer scientists in both poles of the divided world worked on modelling human cognition with the aim of building special teaching computers that would turn instruction and learning into controllable, rational, and individualized processes. The unique algorithms of these computers, noted the creators and advocates of these technologies, allowed these machines to take full control of students’ learning and, ultimately, would enable them to surpass human teachers in training scientists and engineers, the intellectual manpower that was crucial to national survival during the Cold War.

My dissertation makes interventions to the history of Cold War technoscience and the history of computing.  It builds on the recent transnational history of East-West science and technology transfer that has established that the USSR and US co-produced new scientific methods of governance, such as operations research and systems theory, that existed under the umbrella term “cybernetics.”[1] I show that American and Soviet teaching computers were the instruments of this newly emerged scientific governmentality as these two high-modern states put the scientific epistemology of cybernetics into practice and created technologies that would rationalize how humans teach and learn. Additionally, US and Soviet projects in computer-based education deeply informed each other. The American and Soviet sides exchanged and circulated ideas about human cognition, computing, and education through an intricate network of Cold War institutions that facilitated this knowledge transfer despite these countries’ different ideological, political, and economic systems.

I contribute to the history of computing by analyzing pedagogical computing as an important site of investigation in the history of computing and Artificial Intelligence. I suggest that educational institutions were the places that provided computer scientists and engineers with unique facilities to investigate the mechanisms of human learning, develop various models of human cognition, and test the quality of these models. As Michael Mahoney has argued, every software is a model that translates a portion of the world into the language accessible to a computer.[2] The software that was developed for Soviet and American 20th-century teaching computers translated the mechanism of human learning into the language of logic and mathematics. I show that some of the instructional software developed in the US and the Soviet Union later became instrumental in the design of expert systems, an approach to Artificial Intelligence that was dominant in the 1980s and attempted to simulate how experts solve problems. Attending to the history of machines for learning, therefore, can help us better understand the history of Artificial Intelligence research and the intricate paths that have led us to machine learning, which is currently the dominant approach to Artificial Intelligence.

As a CHSTM fellow, I visited two Consortium member institutions, the Harvard University Archives and the Rockefeller Foundation Archive Center. At both repositories, I found the material that enriched my understanding of the conceptual and institutional level of American research and development in special pedagogical computers. At Harvard, I worked with the collection of the Committee on Programmed Instruction, Records of the Office of Programmed Instruction, and the Records of the Center for Cognitive Studies.  The Harvard Office of Programmed Instruction was one of the important sites in the complex network of institutions that sought to formalize human learning and render it in a controllable process. The first two collections chronicle the rapid growth of the office enabled by the Harvard and Carnegie Corporation, and the connections between Harvard psychologists working on programmed instruction and their counterparts at other American universities and private companies. The Records of the Center for Cognitive Studies document the ARPA-funded research on human cognition that shaped some of the trends in American pedagogical computing in the 1970s.

At the Rockefeller Archive Center, I worked with the documents of the National Science Foundation and Ford Foundation records that contain materials pertinent to grant programs for the studies of human learning and the design of teaching computers in the 1960s-1970s. I particularly found helpful the grant reports that helped me understand the scope of American research and development in programmed instruction.  For instance, I found documents that elucidate how American psychologists and educators justified the benefits of computer-based teaching and learning. Such papers reveal how the projects in pedagogical computing were deeply embedded in the discourse of Cold War rationality and technoscientific competition.

With the support of the CHSTM Dissertation Fellowship, I conducted archival research that has helped me to enrich my historical analysis. The documents that I found at the Harvard University Archives and the Rockefeller Archive Center helped me understand how human learning became a subject of psychological and computer studies in the 20th-century in the United States. They also offer an account of how private companies have capitalized on the studies of human learning and came to develop their technologies that promised to enhance this unique human cognitive ability. In the name of progress, innovation, and national prosperity, nowadays, in the US, many government agencies, philanthropies, and companies advocate for the mass introduction of personalized educational technology to American schools.  My project offers the historical context to the current promises about the unique abilities of computer technology to manage, streamline, and enhance the ways we learn and think in the 21st century.