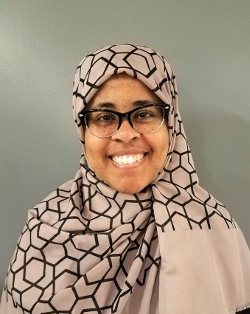 Ayah Nuriddin is a 2018-2019 Dissertation Fellow and Ph.D. Candidate in the Department of History of Medicine at Johns Hopkins University.

In order to capture the different ways that African Americans engaged eugenics and racial science, the project required a variety of sources that illustrated the broad appeal of eugenics and racial science. With the generous support of the Consortium, I began research at the College of Physicians Historical Medical Library. The collections there proved very helpful, and included a number of sources about National Negro Health Week (NNHW). NNHW was a public health program initiated by Booker T. Washington and sociologist Monroe Work in 1915, and its primary goal was to improve the collective health of African American as a way to uplift the race. I later learned while using the Charles Davenport papers at the American Philosophical Society (APS) that both Washington and Work corresponded with Davenport and attended eugenics conferences during their careers.

Next, I visited the New York Academy of Medicine (NYAM) to look at collections about the history of birth control and public health. NYAM also had materials on NNHW, including pamphlets and periodicals tracking its evolution. NYAM’s collection of rare books was also extremely helpful to examine the ways in which white physicians and scientists wrote about race and racial difference, as well as the ways that African Americans engaged the work of American eugenicists. These books also included published conference proceedings from the Race Betterment Foundation and the International Eugenics Congress, in which I found greater African American participation than I had previously realized.

While in New York, I also visited the Rare Book and Manuscript Library at Columbia University to use the Alexander Gumby Collection of Negroiana. Alexander Gumby was an African American bookstore owner in Harlem who put together around 300 scrapbooks over the course of his life. Upon his death, he donated the scrapbooks to Columbia University. The Gumby collection has news and magazine clippings, pamphlets, letters, and photographs documenting some of the most important moments in African American history and culture. Some were dedicated to significant figures like W.E.B. Du Bois while others were organized by themes like “amalgamation of races.” The scrapbooks really captured the different and nuanced ways that African Americans talked about race and health in all kinds of publications. I also worked with the oral history collections, and viewed the oral histories of Dr. Dorothy Boulding Ferebee, Eunice Rivers Laurie, George Schuyler, and Thelma Berlack Boozer. The oral histories added significant depth to my understanding of how these figures navigated questions of race, health, and heredity in their work. It was an unexpected surprise to see the extent to which eugenic ideas shaped their thinking about racial improvement and equality.

I concluded my fellowship at the American Philosophical Society (APS), where I used several collections of prominent eugenicists and eugenics organizations. The papers of the Eugenics Record Office (ERO) and the American Eugenics Society (AES) were not only useful in understanding the inner structures, membership, and concepts of the eugenics movement, but also showed the ways in African Americans engaged questions of racial improvement as part of the movement. As I argue in the dissertation, African Americans were active participants in the eugenics movement. They were members of organizations like the AES, they were in communications with its leaders, and they mobilized its ideas in service of racial uplift. In the papers of Charles Davenport, I worked with correspondence between Davenport and African American leaders like Booker T. Washington, his successor Robert Russa Moton, and sociologist Monroe Work. Work even presented his “Negro Year Book” to the Second International Eugenics Congress in 1921. In the papers of Raymond Pearl, there was correspondence between Pearl and various members of the National Association for the Advancement of Colored People (NAACP). Pearl also corresponded with Howard University physician and physical anthropologist William Montague Cobb. In addition to developing a warm personal rapport, Pearl and Cobb corresponded regularly about race, anatomy, and anthropology. Cobb even invited Pearl to visit Howard University to discuss questions of race, disease susceptibility, and the merits of birth control for African Americans. Lastly, I also used the papers of the American Society of Human Genetics to look at the ways in which African Americans were involved in the organization and continued to engage questions of race and heredity after WWII. Even as the structures of the eugenics movement shifted into new organizations, eugenic ideas continued to be pervasive and shape the ways in which African Americans understood race and genetics.

The support of the CHSTM was immensely beneficial to my project. I was able to gain new insights into the ways in which African Americans mobilized eugenics and racial science through a plethora of rich sources. The archivists, librarians, and other staff members at each institution were so incredibly gracious and generous with their time and resources. I was also fortunate to benefit from the community of fellows at CHSTM, and their feedback on my work has been extremely valuable. My dissertation has been enriched by my time as CHSTM Dissertation Fellow and allowed me to broaden my analysis of race, health, and heredity in the nineteenth and twentieth centuries.