Making the Peripheral Central: Rural Healthcare, Nursing, and the Anglo-World, 1887-1939 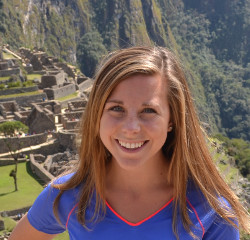 Martha Groppo is a 2017-2018 Research Fellow and a Doctoral Candidate in the Department of History at Princeton University.
Traces of Elsie Allardyce’s rural healthcare work are scattered across the globe. This is unsurprising: As the wife of a colonial administrator she lived her life in several different corners of the British Empire. Like her life, her interest in rural welfare linked multiple locales.
In order to piece together the archival remainders of Lady Elsie Allardyce’s rural healthcare brainchild, the Newfoundland Outport Nursing and Industrial Association (founded in 1924), I started my research in Newfoundland, following the story of the association all the way from St. John’s to St. Anthony and stopping in some of the small outport communities assisted by the scheme and its antecedent (founded by Lady Constance Harris in 1920) along the way. That was just the beginning. Many of the Allardyce family’s records are in Tasmania, where Sir William Lamond Allardyce served as governor before taking up the governorship of Newfoundland in 1922, and where a bush nursing service that likely introduced the couple to rural nursing had been established several years before their tenure. Elsie Allardyce’s abundant nursing connections also led me to the United Kingdom. The records of various nursing associations that supported her efforts, supplied her with nurses, or shaped many of her ideas about rural healthcare can be found in archives in Central London, Kew, and Oxford. Material related to the local Scottish nursing associations that helped inspire her Newfoundland association’s pay structure are further afield, deposited in collections across the Highlands and Islands.
After several years of following the elusive Allardyce’s wandering footsteps, my archival journey took me to Yale University’s Sterling Memorial Library this spring. There, thanks to research funding from the Consortium for the History of Science, Technology and Medicine, I was able to study Allardyce’s correspondence with one of her key rural healthcare collaborators. This correspondence added important layers of depth to my analysis of the interlocking social and ideological connections that inspired her nursing organizational work.
Allardyce was just one member of a much larger group of rural healthcare campaigners my research follows. The project reconstructs a densely interconnected network of patronesses and presidents who established rural and frontier nursing associations for impoverished white Britons across the British Empire from 1880 to 1939. These individuals drew on the experiences of their friends and acquaintances at work elsewhere in the Empire and made explicit comparisons between seemingly disparate geographic locations. The healthcare challenges of rural Britons across the Empire were really quite similar, members of the network argued. Surely the same approaches to addressing them could be tried. Campaigners attempted to grapple with common rural healthcare challenges of finance, distance, and geographic barriers by hiring highly-competent, mobile nurses who were self-sufficient and willing to work very hard to reach their scattered and isolated patients. My research follows nursing personnel and ideas across a number of rural zones including the South African veld, Scottish Highlands, Australian Outback, Canadian Northwest, Irish Congested Districts, and Newfoundland Outports. These sites of intervention were linked in the conversations of healthcare campaigners, who called upon experience gained both in the Empire and in the rural United Kingdom.
The project traces the personal connections behind the rural nursing network, but also interrogates what rural nursing associations can tell us about the ever-changing meanings ascribed to rural lives by outsiders. The campaigners behind the network attempted to bring peripheral patients to the center of national and imperial healthcare agendas. In the process, campaigners explained to would-be donors and supporters why they believed the health and survival of different populations of poor rural Britons (whom they almost universally presented as idealized examples of the so-called “Anglo Race”) was a national and imperial necessity. Following the same basic healthcare model across the Empire allows me to examine how such arguments about the value of rural lives changed over time and space. The nationalistic, demographic, economic, ideological, and racial arguments used to justify expensive and ambitious attempts to reach isolated patients are illuminating. Through my reconstruction of the rural nursing network and analysis of the various arguments put forth in support of rural nursing, I hope to challenge the “peripheral” place of rural people in wider histories of change, innovation, medical modernity, and reform.
Ample traces of this scattered rural nursing network remain in the minutes and folders of now-defunct healthcare organizations, in the letters and diaries of private family papers, and in a large number of archival collections ranging from local historical societies to national libraries. The Consortium has assisted me in following several key strands of this network to American collections at Yale University, the Barbara Bates Center for the History of Nursing at the University of Pennsylvania, and the Rockefeller Archive Center in Sleepy Hollow, New York. The opportunity to look beyond the British Empire has challenged me to think more broadly about rural healthcare and the ways it was discussed in the period I examine. It has also served as a reminder that networks—like transnational lives—rarely enjoy neat geographic borders.