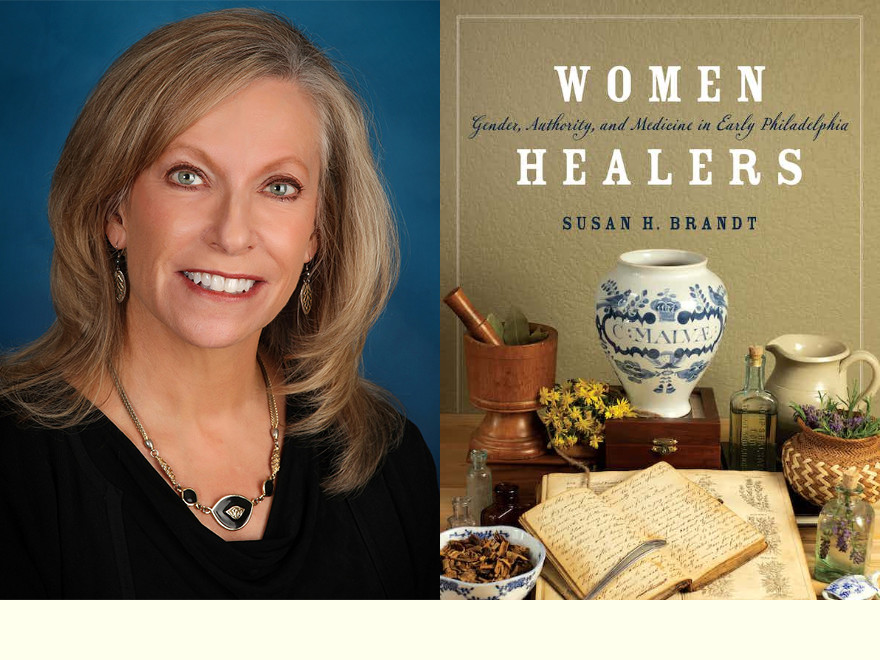 In this episode of Perspectives, we speak with Susan Brandt, author of Women Healers: Gender, Authority, and Medicine in Early Philadelphia.

In her eighteenth-century medical recipe manuscript, the Philadelphia healer Elizabeth Coates Paschall asserted her ingenuity and authority with the bold strokes of her pen. Paschall developed an extensive healing practice, consulted medical texts, and conducted experiments based on personal observations. As British North America’s premier city of medicine and science, Philadelphia offered Paschall a nurturing environment enriched by diverse healing cultures and the Quaker values of gender equality and women’s education. She participated in transatlantic medical and scientific networks with her friend, Benjamin Franklin. Paschall was not unique, however. Women Healers recovers numerous women of European, African, and Native American descent who provided the bulk of health care in the greater Philadelphia area for centuries.

Although the history of women practitioners often begins with the 1850 founding of Philadelphia’s Female Medical College, the first women’s medical school in the United States, these students merely continued the legacies of women like Paschall. Remarkably, though, the lives and work of early American female practitioners have gone largely unexplored. While some sources depict these women as amateurs whose influence declined, Susan Brandt documents women’s authoritative medical work that continued well into the nineteenth century. Spanning a century and a half, Women Healers traces the transmission of European women’s medical remedies to the Delaware Valley where they blended with African and Indigenous women’s practices, forming hybrid healing cultures.

Drawing on extensive archival research, Brandt demonstrates that women healers were not inflexible traditional practitioners destined to fall victim to the onward march of Enlightenment science, capitalism, and medical professionalization. Instead, women of various classes and ethnicities found new sources of healing authority, engaged in the consumer medical marketplace, and resisted physicians’ attempts to marginalize them. Brandt reveals that women healers participated actively in medical and scientific knowledge production and the transition to market capitalism.

Susan Brandt received her undergraduate degree from Duke University and her PhD in History from Temple University. She completed a fellowship at the University of Pennsylvania McNeil Center for Early American Studies. Brandt was also awarded fellowships from the American Council of Learned Societies, the Consortium for History of Science, Technology and Medicine, the Library Company of Philadelphia, the American Philosophical Society, and other organizations. Her dissertation on women healers was awarded the 2016 Lerner-Scott Prize for the best doctoral dissertation in U.S. Women's History by the Organization of American Historians. Prior to pursuing a career in history, Brandt worked as a nurse practitioner.

The Consortium's collections provide many opportunities to learn more about the history of gender and healing in the early modern period and nineteenth century.

Our cross-instiutional search tool allows researchers to investigate materials across multiple institutions from a single interface. With more than 6 million catalog records of rare books and manuscripts, the Consortium's search hub offers scholars and the public the ability to identify and locate relevant materials.

Receipt book; based largely on the receipt book of Elizabeth Coates Paschall, College of Physicians of Philadelphia

Recent work from our fellows:

Katherine Arner, Shaped by Fever, Commerce and War: American Medicine and Public Health in the Era of Atlantic Revolutions

Objects, Images, and Spaces of Health

Women, Gender and Sexuality in the History of Science, Technology and Medicine